The Beach Boys Return to the Sandler Center 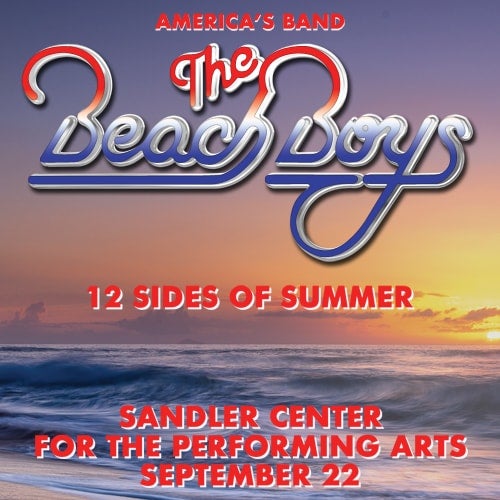 In an era that celebrates positive vibes, The Beach Boys are bringing their “Good Vibrations” back to Virginia Beach. As The Beach Boys mark more than a half-century of making music, the group continues to ride the crest of a wave unequaled in America’s musical history. Their name has become synonymous with the California lifestyle and has become an American icon to fans around the world. The Beach Boys will pull into town to perform on Tuesday, September 22 at 8 PM.

Since lead-singer Mike Love penned the lyrics to The Beach Boys’ first hit, “Surfin’” (1961), dozens of the bands chart-toppers have become eternal anthems of American youth including “Surfin’ USA,” “Surfer Girl,” “Fun, Fun, Fun,” “I Get Around,” “California Girls,” “Help Me Rhonda,” “Barbara Ann,” “Good Vibrations,” “Wouldn’t It Be Nice,” “Rock and Roll Music”, and “Kokomo.” The Beach Boys have sold over 100 million records worldwide and have received more than 33 RIAA Platinum and Gold record awards. The Rock And Roll Hall of Famers where also honored at the 2001 Grammy Awards with the Lifetime Achievement Award. With more than five decades of touring under their belts, The Beach Boys have performed more concerts than any major rock band in history.

The Beach Boys are led by Mike Love, who, along with longtime member Bruce Johnston, musical director Scott Totten, Brian Eichenberger, Christian Love, Tim Bonhomme, John Cowsill, Keith Hubacher and Randy Leago continue the legacy of the iconic band. This concert will not feature Brian Wilson, Al Jardine or David Marks. As summer winds to an end this September, embrace the endless summer mentality that The Beach Boys champion.